I am trying really hard to get some organization in my daily routine. Last night I made a list of accomplishments I want to complete today. So far I'm still on track. Finished laundry, froze some corn, visited with neighbor Bob for our regular Monday coffee and straightened up the house. I really needed a break before lunch so I decided to check the computer. Since I can really get caught up in staying on the computer I do not get on till after certain things are done. This afternoon I'm hoping to get part of the basement cleaned so I can move my Sunday school and mission work to a large work area. It feels good to get something done.
Posted by grandma at 9:11 AM 1 comment:

This morning at Sunday School I normally have 4 children who come regularly but today we were blessed with seven. This may not sound like many to you but for our small church that's pretty good. It was the last day of our quarter so I planned a little party because some of the children will be moving up a grade. I had brought Little Debbie's brownies for a snack but there were only six in the box. I asked if anyone would like to share and two of the children raised their hands. Now this is BIG for 4 and 5 year old's to share. I had brought 5 coloring and sticker books to give out and thought OH! OH! what to do now? God is good because I had put together 4 games from the children's handbooks just before Sunday School started. So, the older kids got the games and the younger ones got the coloring books. I just love teaching these children stories from the Bible and how much Jesus loves them.
Posted by grandma at 7:12 PM No comments:

Whooohoooo! Praise the Lord, Hallelujah! The Chocolate Zucchini Bundt cake came out looking like a cake should look like and taste delicious. The title of my new song is "I'm back in the kitchen again"
Posted by grandma at 6:55 AM 3 comments:

Looking forward to reading Erica's and Jared's blogs this school year. It was nice to meet Jared earlier this year. Now I have a visual to go along with the blog. Thanks you two for making entertaining blogs to read.
Posted by grandma at 3:58 PM 2 comments:

I feel sooooo young! Today I took my friend Kathryn who just celebrated her 90th birthday this month to visit another friend Marie who is 93 and in the nursing home. I was just a kid to them and I loved every minute of it. What a hoot it was listening to these two wonderful ladies talking about "Remember when". It's amazing how people occupied their time before TV and Computers. Maybe even before telephones. Maybe before even snail mail. OK, I went to far that time. Visiting seems like a social activity of the past. Years ago I remember visiting on the weekend my grandparents and creating a lot of fun memories. Food and playing cards stand out in my mind.
I have to admit Grandpa and I live in a neighborhood with retired people and Amish families. When our front door is open they know they are always welcomed to come in for coffee and conversation.
We are Blessed!
Posted by grandma at 6:37 PM No comments:

I tried a new recipe for Chocolate Zucchini Cake. It is a bundt cake which appealed to me because just one pan to wash. I followed all the directions on mixing it, put it in the oven, and OHHHH! it smelled so good. Times up! Took it out of the oven, Looking Good, put it on the rack to cool and before my very own eyes saw it flattened down like a pan cake. Took the cake out of the pan and it was quite heavy. Put the glaze on it which made it heavier. What Happened????? I checked the recipe again and yes I followed all the directions and used all the right ingredients but discovered that my baking powder expired in 2007. Grandpa went down town today and purchased new baking powder and said "try again". Ÿ
Posted by grandma at 5:53 AM 2 comments:

I have mentioned my sister-in-law, Shirley, to you and today I have a cute true story she sent me by email. Anyone who has a cat will appreciate these stories.

I have 2 funny stories about our cat, Sammy. She must be about 15 or 16 years old so is not in the best of condition. Our neighbors on one side found some bones on their driveway-one looked like the a back leg bone of a rabbit or cat or something with some fur attached, and the other bone was just a bone. Our neighbor is accusing Sammy of catching what ever it was and eating it! I don't know whether to be proud to think she could still do that, or mad because she is not guilty. She never ate any mouse or bird that she caught-just wanted to bring them in the house to show off .I think we have a coyote in the neighborhood.

Then a couple of days later, another neighbor came over and said he had mice in his garage and asked John if he could borrow Sammy for the night . He wanted too lock her in the garage to catch the mice. He has a nice little corvette in the garage, and parks his old cadie in the driveway. Poor Sammy! She would have been scared to death and maybe would put a few well deserved scratches on the corvette. These neighbors love to tease.
Posted by grandma at 9:38 AM 1 comment:

Today we received email photo's from two of our granddaughters. Thank you Erica and Jess. We also received in the USA mail a letter from our grandson, Kyle. That makes for a Happy Grandma and Grandpa.
Posted by grandma at 12:04 PM No comments:

Today I'll be working at the church for a funeral dinner. I boiled up 2 dozen eggs for deviled eggs. I can't help to think of my sister-in-law who makes the best deviled eggs. Also took a rhubarb pie out of the freezer to bake. Hope it comes out alright.

Our grandson, Kyle, had 4 wisdom teeth taken out yesterday. Ouch! Kyle will be a senior at Grove City College. Glad he had that done before school started.

If anything exciting or unusual happens today I'll let you know.

Have a great day!
Posted by grandma at 6:36 AM No comments:

Today I received a web newsletter from Jinny Beyer. Jinny is a quilter that hand pieces and hand quilts all her quilts. She designs all her own fabrics which I have come to love and order from her web site. In her news letter today she had the web site for Alex Anderson's, The Quilt Show, which was an hour long interview with Jinny. I was able to see her home, gardens, quilts and learn how she became interested in quilting. Alex's web site is one you have to subscribe to annually. This hour long show of Jinny Beyer is free till August 22nd. If any of my readers are interested in viewing this show email me and I'll forward it on to you.

This evening Grandpa and I are going to the neighbors for a picnic. There was a benefit bowl- a -thon this afternoon for a little girl who has cancer. We didn't go bowling but we are going to the picnic that follows. Cancer is such an evil and to see a young child have to suffer with this dreadful decease is heart wrenching.
Posted by grandma at 1:48 PM No comments:

Today Grandpa was painting our deck floor. I can tell he is feeling all the bending and kneeling he did for three hours of work. I have to say it really looks nice. When Grandpa does something he ALWAYS does a good job.

Today is my bible study teachers birthday. She is 90 years old and still going strong. What a privilege for me to have her as a mentor. Happy Birthday Kathryn!
Posted by grandma at 4:01 PM No comments:

Remember when I wrote about making my zucchini bread and it stuck to the bottom of the pan? Today I made more zucchini bread and used the tip my sister-in-law, Shirley, gave me and it worked like a charm. I copied and pasted her tip:

Things that I keep forgetting to tell you: (1). I always line the bottoms of my bread pans with waxed paper and spray the sides with Pam to make the bread easier to get out of the pan. I made a pattern out of cardboard from a cereal box for my mini pans. Also, my mini pans are silicone so I can pull the sides away and push them up from the bottom

Thanks Shirley, you made my life a lot easier.
Posted by grandma at 6:50 PM No comments:

OK! This is a visual. It is now 7 pm and I'm in the kitchen just finishing cleaning up dishes. I have my favorite jukebox web site playing 50 tunes. http://www.tropicalglen.com/ The hips are swaying the toes are tapping and in my mind I can do anything I did 50 years ago. The heart is pitter patting and Grandpa is sitting in the living room and I just can't contain myself any longer so off to the living room I go and you all could just use your imagination :)
Posted by grandma at 4:07 PM No comments:

Today I had an opportunity to drive someone Else's car which is a different make then what we drive. I got in the drivers seat and made all the changes to fit my body. That took a few minutes. Left the driveway headed to the pool and looking good. I wanted a little air so I rolled down the window but it went down all the way and I only wanted a little air. Tried to roll it up and another window went down. Pretty soon I had all 4 windows down and couldn't figure how to get them back up. Surely I didn't want to mess around while I was driving. When I made it to my destination I was pretty well wind blown. OH WELL! I was going swimming. In our car the window washers are on the left side of the steering wheel but you guessed it theirs was on the right. Same place as the gear shift. They now have very clean windows.
The funny thing about this is "I Love their car".
Posted by grandma at 4:27 PM 1 comment:

Today our Amish neighbors brought over fresh beets from their garden. We had some for supper and there is enough to freeze for other meals. YUM! Also we received a jar of refrigerator pickles and zucchini. OH! the life in the country is wonderful.
Posted by grandma at 3:10 PM 1 comment: 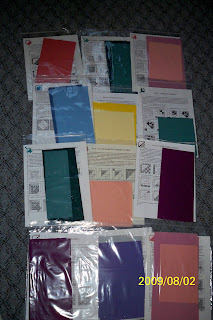 I'm so excited! I mentioned we have Amish neighbors and one of the girls that cleans for me now has a boyfriend that is pretty serious. Grandpa said I should start thinking of making a quilt for her. I had no idea what she would like or even want in a quilt. I started looking through some drawers of projects I wanted to do and came across these Amish Quilt Blocks that came from a very good friend of mine that had a block of the month business called "Gone To Pieces". These blocks were some she had extra and sold as sale items. I'm not sure how long I've had them but I can tell you it's been several years. All I can say now is THANK YOU RUTH, You are a God send.

Posted by grandma at 5:29 PM No comments: